Patricia A. Grady to Retire as NINR Director 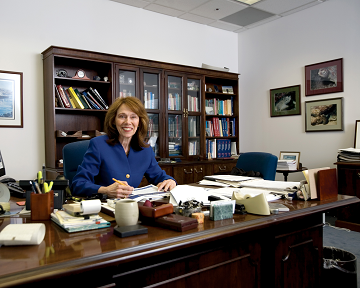 In 1995, the National Institute of Nursing Research (NINR) was less than 10 years old. It had recently been elevated from a Center to an Institute, and its annual budget was around $50 million. That year, then-NIH Director Harold Varmus appointed a new director for NINR, only the second person to hold the position. The new leader would be responsible for continuing to establish the Institute as a member of the NIH community, and for guiding NINR (and the field of nursing science) into the 21st Century.

After 23 years on the job, on August 31, 2018, Patricia A. Grady, PhD, RN, FAAN will retire as the director of NINR. With a budget now approaching $160 million, NINR is recognized as a vital part of the health research community, contributing to improved health and quality of life for countless Americans. NINR supports influential programs of research in symptom science, wellness, self-management, and end-of-life and palliative care research. The Institute’s intramural research program is thriving in improving our understanding of symptoms, and NINR’s popular training programs have prepared a new generation of nurse scientists to succeed in today’s interdisciplinary research environment.

“Thanks to Pat’s skillful leadership and a dedicated extramural community of nurse scientists, NINR has grown into an essential component of the NIH mission,” noted NIH Director Francis Collins, MD, PhD, in a statement announcing Dr. Grady’s retirement. “Nursing science, with its unique clinical emphasis, provides the critical link between the laboratory, the clinic, patients, and families.”

Dr. Grady has had a remarkable 30-year career as a dedicated public servant. She joined NIH in 1988 as a program administrator at the National Institute of Neurological Disorders and Stroke (NINDS), later going on to serve as NINDS’s deputy director and acting director. She arrived at NIH as an internationally recognized scientist, focusing primarily on stroke, specializing in cerebral blood flow, metabolism, and function. She was elected to the Institute of Medicine (now the National Academy of Medicine), and has been recognized for her contributions to science with honorary degrees and awards from universities and other scientific organizations across the world.

“It has been a profound honor to serve as Director of the National Institute of Nursing Research. Helping to guide the field of nursing science, with its enthusiastic community of scientists in the extramural community and here at NIH, has been an immensely rewarding experience. I’m very proud of what we’ve been able to accomplish,” stated Dr. Grady.

During Dr. Grady’s tenure, NINR-supported investigators have made scientific advances that span all corners of nursing science, and that have led to improved health outcomes and quality of life for many. NINR-supported scientists have tested interventions leading to better health behaviors and social skills in high-risk adolescents in high school; improved depressive symptoms in stroke survivors; and reduced blood pressure in inner-city men. They have explored differences in gene expression in military personnel exposed to a blast; developed decision support technology to identify patients who need post-acute care; and facilitated communication between patients with advanced illness and their families and clinicians.

As director, Dr. Grady developed programs and initiatives that demonstrated a commitment to future nurse scientists and to NINR’s stewardship of nursing research. She led the development of NINR’s Summer Genetics Institute and Methodologies Bootcamp Series, two of the many popular NINR training initiatives that have expanded the scientific horizons of both new and experienced researchers. She created NINR’s Office of End-of-Life and Palliative Care research to fulfill NINR’s leadership role in end-of-life care research at NIH. The office now oversees the Palliative Care Research Cooperative, a consortium of over 160 research sites that work together to advance this important area of science. Dr. Grady also led the development of four strategic plans at NINR to communicate the Institute’s research mission and priorities to the scientific community.

“I appreciate the commitment of the NINR staff who have worked tirelessly in support of our mission. Together, we’ve created an organization that is truly special, and I look forward to seeing what the Institute can accomplish in the future,” remarked Dr. Grady.

Following Dr. Grady’s departure, Dr. Ann Cashion will serve as the acting director of NINR while NIH conducts a national search for the next director. Currently, Dr. Cashion serves as the NINR scientific director and acting deputy director and has been at NINR for over seven years. She is a well-known scientist and leader in the field of nursing science with expertise in genetic markers that predict clinical outcomes. Dr. Cashion has held leadership positions on several scientific boards and is a member of the National Academies of Sciences, Engineering, and Medicine Roundtable on Genomics and Precision Health. A message from Dr. Grady on her announcement is available here. Dr. Collins’ statement can be found here.